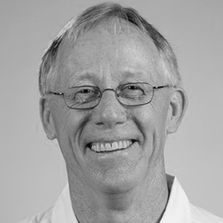 John Dunning, an AVCA Hall of Fame Inductee, retired in 2017 after coaching volleyball for 42 years, 10 at the high school/club level and then for 32 seasons at University of the Pacific and Stanford University.

In 1985, Dunning stepped onto the Pacific campus, guided the team to a national title in his first year as a collegiate head coach and was named the Volleyball MonthlyNational Coach of the Year. The next year, 1986, he helped the squad repeat its landmark feat. Dunning’s pair of titles with the volleyball program remain the only two national championships in any sport in Pacific’s history.

His teams at Pacific and Stanford captured five national titles, the second-most in NCAA history, and coached in more Division I national title matches (10) than anyone. Dunning took all 32 teams he coached to the NCAA Tournament and led 27 of those teams to an NCAA Regional. He ranks among the top five coaches all-time with a .828 career winning percentage, and his 888 career wins are the seventh-most all-time by a Division I head coach.

During his 32 year career his teams were 91-27 in the NCAA Tournament and he coached 40 athletes to 81 All American awards.

Dunning capped off his illustrious career with a fifth national title in 2016. The Cardinal, which was the youngest team to play in a national title match with four freshmen starters, defeated three higher-seeded opponents on its journey to the championship. He was honored as the AVCA Coach of the Year for the second time during his tenure at Stanford.

Dunning now resides in Lodi, California with, Julie, his wife of 45 years. They have two children, Lisa and Lauren, and two grandchildren McKenzie and Cole.