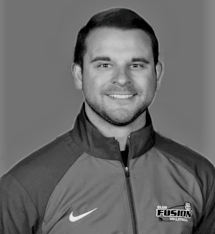 Jason Giecek has been with Club Fusion since 2017 and been in the role as Recruiting Coordinator since 2019. He has coached a variety of ages groups from 16-18s. Previously to joining the club ranks, Jason had stops at Michigan State, Texas State, Central Michigan, & University of Hartford.  He also has served on the JVRA Club Advisory Board for the past two years.

Growing up in Chicago, he fell in love with the sport at a young age and hasn’t stopped since. Jason is extremely passionate about growing the sport of Volleyball and developing young athletes. When he joined Club Fusion, he brought his wealth of relationships that he developed during his time at the collegiate level. This has paved the way for 40+ athletes playing at the next level in the last 2 years.

Jason attended Michigan State University and was a member of the Men’s volleyball team (2008-2012). Jason and his wife Lauren live in Northbrook, IL