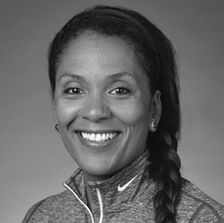 Salima Rockwell retired as the Penn State Associate Head coach following the 2017 season after coaching in Division I Volleyball for 17 years. Her last 4 seasons as an Associate Head Coach were spent at Penn State University from 2014-2017, where her primary duties include working with the setters and the offense, recruiting and match preparation. Rockwell helped Penn State to their 7th National Title in 2014. Prior to her most recent stint at Penn State, she was The Associate Head Volleyball Coach at The University of Texas, where she earned the AVCA Assistant Coach of the Year award in 2012 when the team won the National Championship Title.

Before coaching at The University of Texas, Rockwell returned to her alma mater, Penn State after spending the 2005 season as an assistant coach at Oregon State under legendary head coach Terry Liskevych. She spent three seasons at Penn State, one as the Director of Volleyball Operations in 2006, and two as an assistant coach in 2007 and 2008 winning the National Championship in back to back years. Between her playing days at Penn State and coaching at Penn State and Texas, she has participated in 10 final fours and won 4 National Titles and mentored and coached numerous All-Americans. While she has retired from coaching, Salima is keeping her hand in the game of volleyball as the Technical Director for Austin Juniors VBC and TV Volleyball Analyst for ESPN, LHN, FOX Sports and The Big Ten Network.

The former Salima Davidson was a four-time All-Big Ten selection, Big Ten Player of the Year in 1993, Penn State Female Athlete of the Year, a four-time AVCA All-Region selection, two-time member of the NCAA Championship All-Tournament team, and a three-time All-American setter for the Nittany Lions from 1991-94. She was an alternate in the 1996 Olympic Games in Atlanta Georgia and subsequently served as a two-time team captain of the U.S. National Team in 1997 and 1998 where she earned The Coaches Award during both of those seasons and the MVP award at the BCV Cup in Montreaux, Switzerland.

A native of Pittsburgh, Pa., Rockwell was an assistant at the University of Pittsburgh from 2001-03 where she began her coaching career and worked primarily with the Panthers setters. She was also the Panthers lead recruiter and signed four of their top five recruits in 2002. After she was done playing and prior to coaching, Rockwell spent three years in the ultra-competitive world of pharmaceutical sales, consistently ranking as a top-selling representative for Boehringer-Ingelheim Pharmaceuticals.

She graduated in 1994 with a Bachelor of the Arts in Speech Communications. Rockwell recently relocated back to Austin Texas with her husband of 16 years Jeff Rockwell, and their two sons Logan (14) and Rylan (10).